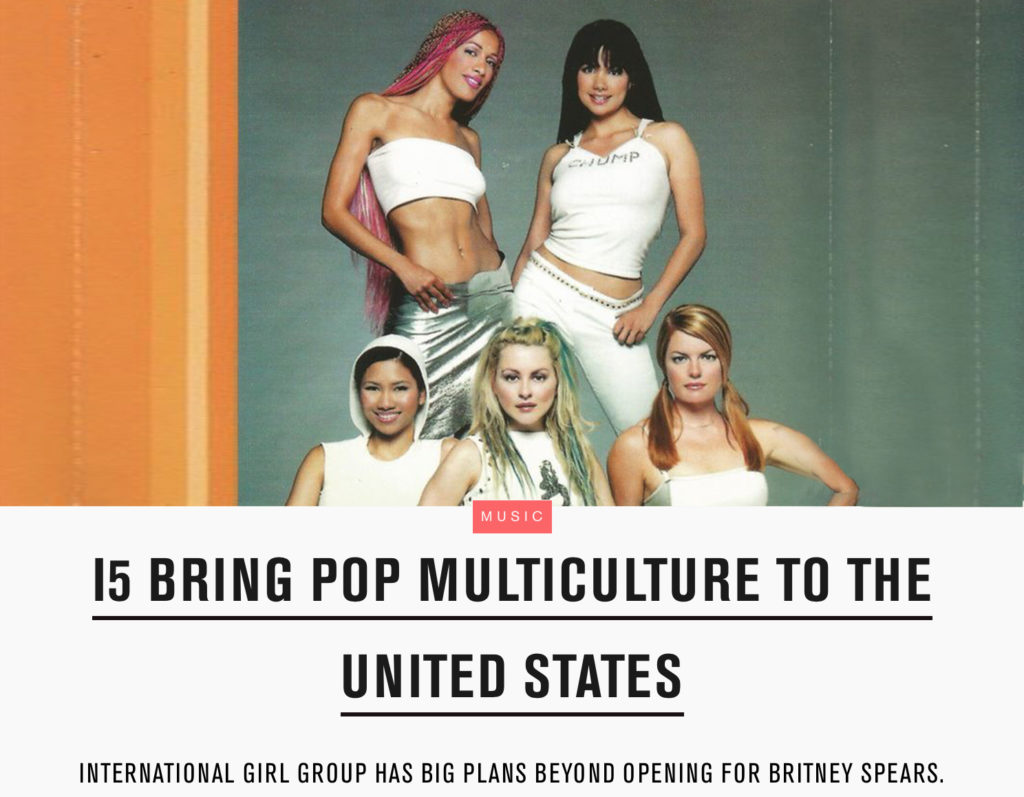 Los Angeles girl group i5 didn't name themselves after an interstate highway — the "i" stands for international, which reflects the cultural makeup of the band and its music.

Composed of five young women — Andi, 23, from England, Christina, 23, from the United States, Gaby, 22, from Mexico, Kate, 20, from the Philippines and Tal, 21, from Israel — i5 are opening for Britney Spears on her current U.S. tour. The group's debut single, "Distracted," will be released on Tuesday (July 11). Their self-titled album drops in September.
i5 grew out of an earlier version of the group, one that didn't work out, Andi said. "The people that were running it wanted to create a more stereotypical carbon-copy pop group, and it's very difficult when you just pick girls because of their race. Sometimes their voices don't blend and the personalities don't match, and that's evidently what happened." Although the group faltered, the concept didn't; auditions were held in Los Angeles, and the band's lineup was solidified.

While the group wanted the songs to represent their cultures, they were careful not to make the project too sweeping. They sought out producers and songwriters who could help them strike a balance, Andi said. "We've got five different personalities with five cultures and different styles of music that we all like," she said. "We have to sometimes compromise. [But] a song has to speak to all of us. It has to touch a couple of us on a level. Lyrically, we don't ever want to be a victim in a song; it's got to be danceable or have an interesting twist."

The band certainly chose its songwriters well. i5's debut album features songs by David Frank and Steve Kipner, who penned Christina Aguilera's "Genie in a Bottle" and 98°'s "The Hardest Thing"; Shelley Peiken and Guy Roche, who wrote Aguilera's "What a Girl Wants" and Brandy's "Almost Doesn't Count"; and Diane Warren, who penned i5's standout love song, "If I Ever See Heaven Again."

"Most of us have led meaningful lives," she said. "You have to be pretty courageous to leave your country and come to another one — especially the three girls who didn't speak English. We believe that we've got a story to tell. We don't want to be perceived in a cookie-cutter fashion, so it's important that we're not singing about things that we don't care about and particularly lyrics that sort of create a pattern for women or young girls where they feel it's acceptable to be a victim."

The songs on the debut are marked by well-oiled harmonies and youthful, though not bubblegummy, lyrics and music. It's a collection of pop-flavored tunes that flirt with an array of global styles — among them Euro-dance and Latin pop — and a slate of themes likely to strike a chord with young listeners, particularly songs such as "Best Friend," "First Kiss," and "Sweet and Sassy Girl."

While Andi said the group does not set out to "make a huge statement," they do want to inspire girls to have a positive self-image. "You can be in love, but you don't need a partner in your life to make you complete," she said. "It's really gotta be about building your own self-esteem."

It's also about having a good time. "A lot of our message is really about fun," Andi said. "Like 'Scream, Shout' and 'Best Friend' [which have] sort of comical lyrics typical of i5. We really do have a good sense of humor. We have love songs, we have a song talking about our first kiss and the anticipation. We have a whole mixture of emotions without delving into an area that we don't believe in."

Andi said that i5's image, style and philosophy might spark comparisons to the Spice Girls. "That's fine by us," she said. "Our music is a little bit different. It's a little bit grittier, and it's more international. It's a bit more personal. To be honest with you, that comparison's great. Spice Girls led the way for us. Let's get rid of some of these boy bands. Let the girls get out there."

Clashes Are Inevitable But Reparable

Being in a girl group, however, is not all sugar and spice, Andi said. "It's been two years since most of us have been together. We do butt heads. If I didn't say that, I'd be a complete phony. You've got five girls who are used to being leaders, and we do occasionally butt heads, but we're the kind of thinkers and communicators that really won't leave the room until [a problem is] sorted out.

"You can be saying 'I don't agree with you on this point,' or 'Don't say that, it makes me feel bad.' And then literally two minutes later you're on stage bonding with each other, locking into a cool harmony. It's real life. We're not anything different from normal everyday girls, like a real group of friends."

Once their 20-date tour with Spears is over, i5 will join the Nickelodeon "All That" tour. (Sonicnet's parent company, Viacom, also owns Nickelodeon).

"Then we go home for a month," Andi said. "We shoot the video for 'Distracted,' the single drops and we turn around and get back on the Nickelodeon tour until Sept. 3. I'm on such a high right now. Thank you, America."